Pine Springs is a city in Washington County, Minnesota. The population is 408.

15 Minutes to down town Saint Paul, and 30 minutes to Minneapolis. Pine springs is part of the twin cities metro area. Boarding city is Mahtomedi  is a city in Washington County, Minnesota. Mahtomedi is considered to be a suburb of St. Paul, and is located between St. Paul and Stillwater.  Top ranked school system In Minnesota. 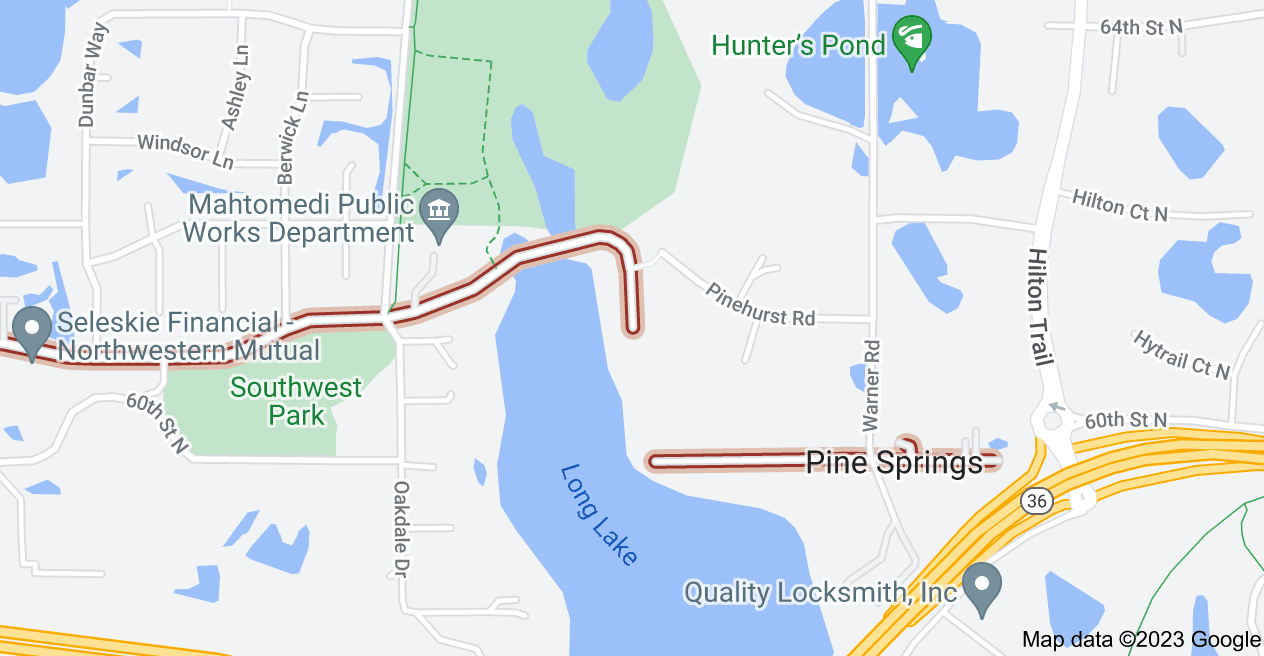 In addition to the Mahtomedi Public School District, Mahtomedi also is home to the St. Jude of the Lake School. St. Jude’s is a private catholic school that educates students from kindergarten to fifth grade. It also is the only catholic primary school offering an International Baccalaureate Program in the Midwest.

Half of Century College, a member of the MNSCU system, is located in Mahtomedi. The other half is located in White Bear Lake, which is the mailing address for the college. Century Avenue, which runs north and south, is the dividing line between Washington and Ramsey counties and between White Bear Lake and Mahtomedi. A long footbridge extends between the West Campus and East Campus of Century College.

The school colors of Mahtomedi Senior High School are blue and gold and the mascot is the Zephyr. Mahtomedi is well known for its girls’ and boys’ soccer and also for its high school football team. The girls team won the state championship in 2004, 2005, 2006, 2008, and 2017. The football team won the state championship in 2005 in an overtime win against the Academy of Holy Angels. On November 5, 2009, Mahtomedi’s Boys Varsity soccer team won its first state championship against Hermantown. The Mahtomedi Zephyr gymnastics team has also won state 10 times, winning their first in 1982. The Mahtomedi Girls’ tennis team also won their first state title in 2016 against the Edina Hornets who had won the past 19 years prior. The Zephyr mascot originally came from the 1930s car Lincoln Zephyr. However, the Zephyr mascot currently references Zephyrus, the Greek god of the west wind.

Mahtomedi Senior High School is a four year public high school located in Mahtomedi, Minnesota. The school houses grades 9-12 with a total population of approximately 1,146 students. About 22% of this population are from surrounding districts due to open enrollment. The school colors are blue and gold, and the athletic teams are known as the Zephyrs. The district (district #0832) was created in 1870, and the original high school was built in 1930. In 1970 a new high school building was constructed several miles south east of the original building and this remains the current high school campus. Based on standardized test scores the State of Minnesota has awarded the school a five-star rating, the highest level that can be achieved. In 2006, Newsweek ranked the school #675 in its “List of the 1200 Top High Schools in America.” The school has also made adequate yearly progress in compliance with No Child Left Behind standards. As of 2015 the school had a demographic of 91% Caucasian, 2% Black, 2% Asian, 2% Two or more races, 2% Hispanic or Latino, and 1% Native American.Finally, out of the total population, only 9% of students qualify for free or reduced lunch. Mahtomedi competes in the Metro East Conference (formerly known as the Classic Suburban Conference), having joined that conference at its inception in 2001 soon after being a founding member of the Metro Alliance in 1997. Prior to 1997, Mahtomedi was a member of the Tri-Metro Conference.

Mahtomedi High School has a high ranking academic program. Among the top ranked 1,200 high schools in the nation, Mahtomedi placed 663rd. The chart below depicts Mahtomedi academic achievement in comparison to the Minnesota and United States averages for the 2006-2007 school year.

Some other notable academic accomplishments include Mahtomedi’s 513 students taking advanced placement classes, and, of the students who take the AP exams after these classes, an 80% passing rate. About 90% of students continue on to college after graduation, and Mahtomedi High School has a dropout rate of 1%.

In 2006, the Mahtomedi School District proposed a plan to create a magnet program within the high school. This program will focus mainly on technology and engineering, to hopefully increase enrollment. As of 2017, the proposition has not been implemented.

Clubs at Mahtomedi High School include:

Homes for Sale in Pine Springs, MN have a median listing price of $277,000 and a price per square foot of $144. There are active homes for sale in Pine Springs, Minnesota, which spend an average of 62 days on the market. Some of the hottest neighborhoods near Pine Springs, MN are Battle Creek, Beaver Lake Heights, Conway, Southern Hayden Heights, Highwood. You may also be interested in homes for sale in popular zip codes like 55128, 55115, or in neighboring cities, such as Mahtomedi, Grant, White Bear Lake, White Bear Township, Stillwater.