Search For Contract For Deed Properties by City or County thru out the state of Minnesota!

Minneapolis is the largest city in Minnesota and will have the most Owner financed properties available.

Recording the contract for deed

Within four months of signing the contract for deed, you must “record” it with the office of the county recorder or registrar of titles in the county in which the property is located. If you do not do so, you could face a fine.

The Minneapolis-St. Paul area, also known as the Twin Cities, is nationally recognized for its high quality of life, with amenities that make it a great travel destination. The Cities have garnered attention for our dynamic music scene, creative chefs, bike trails, exciting theaters and excellent art museums.

Families are drawn to the Twin Cities for the kid-friendly museums, zoos and amusement parks. The hometown sports teams have a large fan base- Vikings- Twins-Wild-and more! Their are 10,000 plus lakes, parks and greenways, offering urban and nature experiences all in one.

Mall of America in Bloomington draws visitors from around the world, not only to shop but for entertainment including an amusement park, aquarium, dining and nightlife.

Beyond the Twin Cities, Minnesota boasts a bounty of natural treasures. Miles of lakes and woods draw outdoor enthusiasts to Voyageurs National Park and the Boundary Waters Canoe Area, both along the state’s northern border. The North Shore of Lake Superior, an All-American Road, is a scenic drive along the world’s largest freshwater lake.

The iconic Mississippi River begins as a small stream at Itasca State Park in northwest Minnesota, winds its way across the state and through the Twin Cities, and widens as it flows below the beautiful bluffs of southeastern Minnesota. Western parts of the state preserve areas of native prairie.

Out standing Fishing and hunting here, and the state has an excellent array of quality golf courses. 1000s of lakeside homes and cabins to full-service luxury estates which will make a great base for vacation or a lake property to live in.

Minnesota’s nickname is “Land of 10,000 Lakes” is apt, as there are 11,842 Minnesota lakes over 10 acres in size. Minnesota’s portion of Lake Superior is the largest at 962,700 acres  and deepest at 1,290 ft  body of water in the state. Minnesota has 6,564 natural rivers and streams that cumulatively flow for 69,000 miles  The Mississippi River begins its journey from its headwaters at Lake Itasca and crosses the Iowa border 680 miles downstream. Its joined by the Minnesota River at Fort Snelling, by the St. Croix River near Hastings, by the Chippewa River at Wabasha, and by many smaller streams. The Red River, in the bed of glacial Lake Agassiz, drains the northwest part of the state northward toward Canada’s Hudson Bay. Approximately 10.6 million acres of wetlands are within Minnesota’s borders, the most of any state except Alaska.

The state has 17 cities with populations above 50,000 as of the 2010 census. In descending order of population, they are Minneapolis, Saint Paul, Rochester, Duluth, Bloomington, Brooklyn Park, Plymouth, Saint Cloud, Woodbury, Eagan, Maple Grove, Coon Rapids, Eden Prairie, Minnetonka, Burnsville, Apple Valley, Blaine, and Lakeville. Of these only Rochester, Duluth, and Saint Cloud are outside the Twin Cities metropolitan area.

Minnesota is the 12th largest in area and the 22nd most populous of the U.S. states; nearly 55% of its residents live in the Minneapolis–Saint Paul metropolitan area -known as the  Twin Cities- .This area has the largest concentration of transportation, business, industry, education, and government in the state. Urban centers in Greater Minnesota – include Duluth- Mankato- Moorhead-Rochester and St. Cloud 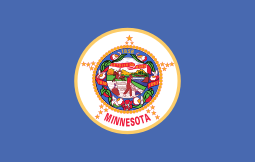