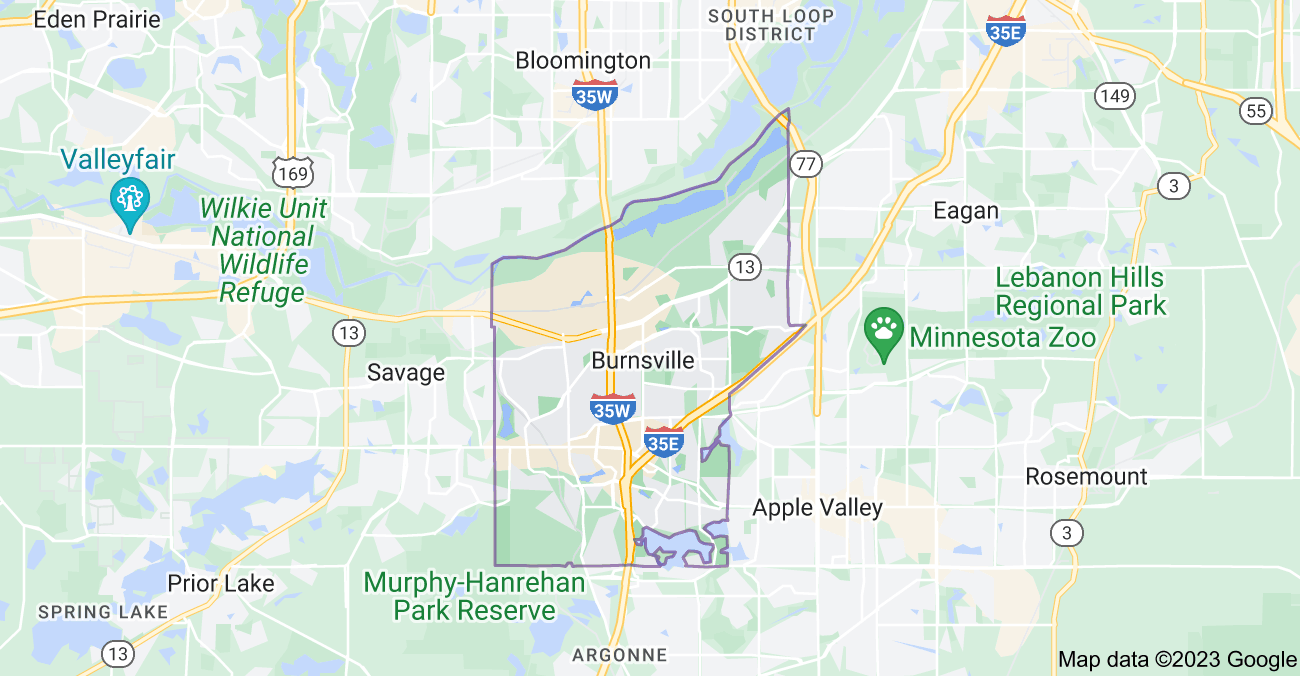 Burnsville is a city 15 miles south of downtown Minneapolis in Dakota County in the State of Minnesota. The city lies on the south bank of the Minnesota River, upstream from its confluence with the Mississippi River. Burnsville and nearby suburbs form the southern portion of Minneapolis–Saint Paul, the fifteenth largest metropolitan area in the United States, with about 3.6 million residents. According to the 2010 census, the population is 61,481.

Burnsville has many attractions, including its regional mall, Burnsville Center. The city is also a recreational attraction with Alimagnet Dog Park, a section of Murphy-Hanrehan Park Reserve, and 310-foot vertical ski peak Buck Hill. Minnesota River wildlife is protected by the Minnesota Valley National Wildlife Refuge.

Originally a rural Irish farming community, Burnsville became the tenth largest city in Minnesota in the 2000 Census following the construction of Interstate 35. Currently the ninth largest suburb in the metro area and a bedroom community of both Minneapolis and Saint Paul, the city was fully built by the late 2000s. Burnsville’s downtown area is called Heart of the City with urban-style retail and condominiums. The Burnsville Transit Station serves as the hub and headquarters of the Minnesota Valley Transit Authority, providing regional bus service to five other suburbs.

The city contains 1,800 acres  of parkland spread throughout 79 parks and is managed by the Burnsville Parks Department which follows a Parks & Trails Master Plan. Only a third is developed and for recreation with the remainder preserved as natural habitat. Burnsville north border with the Minnesota River is within the Minnesota Valley National Wildlife Refuge. Crystal Lake is the city’s major recreation lake allowing boating, fishing, jet-skiing, and swimming. The Burnsville Skate Park is a free facility during summer hours. The Burnsville Ice Center has two large professional ice rinks.

The Burnsville Athletic Club is an all-volunteer youth sports league. It has an annual participation of nearly 1,300 players in the baseball leagues for grades K-12, 80–90 boys basketball teams in grades 3–12, and over 400 players in flag and tackle American football in grades 2–8. There are also traveling teams for boys’ and girls’ basketball, girls’ fast pitch softball, and 8th grade boys football, which play against similar teams from around the state at a higher competitive level. Other adult sports are provided through the city’s recreation department, other recreational organizations, and minor league groups.

The city of Burnsville is home to over 58 playgrounds and roughly 11 recreational lakes. The most heavily used of the lakes are Keller Lake, Crystal Lake, Kruse Lake, and Aligmanet Lake (Which is split with neighbor Apple Valley, MN).

Burnsville Independent School District 191, which includes Burnsville as well as parts of neighboring cities Savage and Eagan, currently has:

About 10.0% of Burnsville’s students attend Independent School District 194 schools; they include: Lakeville North High School, Kenwood Trail Middle School, and Orchard Lake Elementary all of which are in Lakeville.